After their finding online some of my images from last year’s Steampunk Weekend at Blists Hill, Ironbridge Museum got in touch with me and asked if they might use the images in their publicity. My images had a ‘different’ quality to them than others they’d seen. Some of that would be down to the fact that it was a blue sky and intense sun day. I had with me a ProFoto B2 set with some modifiers that included the recently released OCF Magnum. Once the sun was really out they were a useful combination for the light in the images. Instead of just ‘recording’ the light I was shaping what the light was doing.

In my reply to the image use request I indicated that I planned to be going along again this year on the Saturday. Next thing I know I’m due to be picking up some release forms on my way in so that this year’s images might be used in their website etc. The weather forecast was for ‘sunny intervals between the clouds’, much as last year’s was. With the release of a firmware update for the ProFoto A1 that improves the HSS output by about 2 stops I intended to lighten my carry load and take them instead of B2 or B1. The B1 and B2 are more powerful and have a larger, softer, light source. They are however heavier, more cumbersome and potentially slower in use. 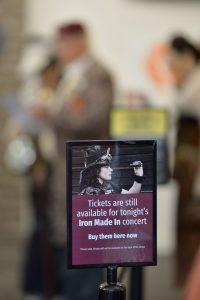 Friday morning did not start well. I failed to get my lead foot over the bath edge whilst stepping in to shower. The result of this is either a badly sprained or broken index toe. Since the treatment is essentially the same, TLC, no point in getting an X-ray to confirm which it is. Unlike the broken ankle of 18 months ago I am still mobile but need to take care and go slowly. I was travelling there with a friend and knew that if the toe did become a factor I’d just have to base myself in one place and not walk around that much. Wearing stiff walking boots I was able to clomp my way around.

As with last year, the forecasts I saw were wrong and the promise of some cloud cover didn’t really happen. Blue skies and bright summer sunshine are great for general visitors. However, they are not the friend of the photographer or anyone who has multiple layers to their attire.

Finding shade outside was difficult and where there was some it often didn’t extend very far from the foot of the building, the effect of it being a midsummer sun as opposed to another time of year. It was also difficult at times to even get to speak to some people let alone take photographs of them due to the number of people who, like me, were there to photograph the spectacular array of clothing and inventiveness. By the time a scrum had finished with some people I thought it best to leave them be so that they might actually relax a bit to enjoy the event for themselves. There is a tendency for ’honey potting’ with subsequently arriving photographers having no knowledge and, in many cases, no consideration for how long the people being photographed have already been rooted to that spot.

The ‘curse of success’ is a common one. The classic example is the Whitby Goth Weekend. Once a few photos from an event circulate on social media or are successful in camera club competitions, following years see the packs descend. Good in terms of revenue for the event but a bit of a problem for the other event goers and for photographers who prefer the more natural perspective of a longer focal length lens. If I can I’ll use a 105mm or 135mm lens. For full length images I might need to be the other side of the street. The pack then descend, moving in close using unflatteringly wide angle lenses and my opportunity is lost. Many seem oblivious to someone who is somewhat further away than they think a photographer can be.
I like to try to be in control of the light. Without trying to take control you are just going to get pretty much the same snaps a very one else. As soon as you take control of the light the you are having some input into the creation that image. Controlling the light might be by moving to a location where the natural light is being controlled and shaped by structural features. For me it is often by using flash. I can accent areas in the image and turn the overall brightness down to create a very different mood and feel. On this day I was using a ProFoto A1 which is like a speedlight but with a somewhat better performance level. Due to the necessity of working quickly I wasn’t metering the flash first but using the TTL option once the ambient light was ‘sorted’. This is not how I like to do things and, to me, it took longer than getting the meter out and setting things that way would. Not only that but the bright sunshine makes viewing the camera more than monitor more difficult and some of the images are not of the lighting ratios that I thought I was getting.

Thanks go to those who were willing to suffer the attention of my camera, I hope the photos here and elsewhere make you consider it worthwhile. I also hope that you get to see the photos of ALL of the other people who took photographs of you. Days like this are YOUR day, not the photographers. If you don’t get to see many people’s photographs, maybe start using ‘if you give me a contact card ( business card ), then you can start taking up some of my time taking photographs of me’. Chatting with some people in the 3rd Foot and Mouth Regiment somewhat strengthened my thoughts on this. Some of what they have experienced or witnessed sounded horrendous. If I overstep things, tell me, I can take it. It is more important to me that you enjoy your event than my getting photographs. It is also important to me that you get the opportunity to see the photos that I take of you.
Time to stop this discourse and get on with the images.