Glastonbury 2015 -Kanye and the rest 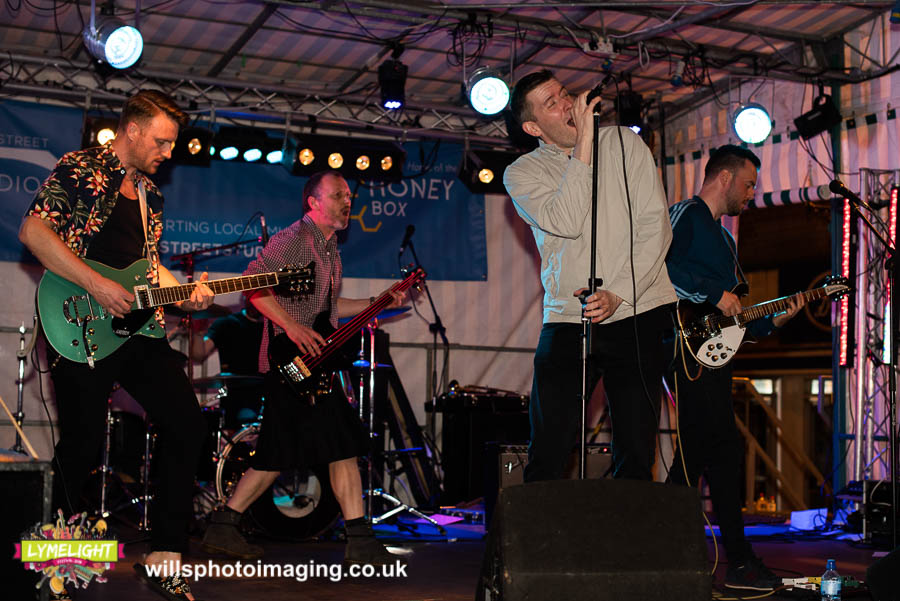 There can be no doubt that Kanye West’s Glastonbury booking and eventual performance created a lot of social media ‘noise’. The petitions and threats that followed the announcement of his booking mirrored that which greeted Jay-Z’s booking a few years back. With Jay-Z he quickly showed that he appreciated that UK events are different from those across the pond and Glastonbury is also very, very, very special. His performance silenced those whose views were not entrenched. Jay-Z at Glastonbury was a success. It might be that this success encouraged the organisers to take a bigger gamble.

On the night of Kanye West’s performance I was watching The Mothership Returns ( George Clinton’s Parliament, Funkadelic, P-Funk and also The Family Stone ) on the West Holts stage. I knew that I’d enjoy this, expecting to hear some of what I both listen to for pleasure and played when I DJ’d as The Boogie Funk Disco. Ah, the 1970s. I was not disappointed. Probably the largest band ensemble that took to the stage and containing the most ‘over 65’s’. Taking the crowd with them and not being insulting to anyone.

The next day I watched Kanye’s set. I am at a loss as to why the BBC did not do what they have done in the past to potty mouthed performers, silence the audio feed. One of the ‘godfathers of rap / jazz funk / MOBO’, Gil Scott- Heron put out a track on his Spirits album called Message to the messengers. He expressed his displeasure at the effect of ‘Gangster rap’ and also of people using expletives without meaning. As for the crowd chanting along with N-word. I simply cannot believe that acceptable standards have fallen so low. If it was The Last Poets, Gil Scott-Heron or others of their era my response might be a little different. They used it as a power word against racism in the US of A. Taking ownership of its use helped to put some of the racists in their place. Nowadays there are some people who just use it to court controversy or to gain a strange type of popularity with un-discerning people. Also of course there are the racists who use it because of their ignorance and ………

Some of the ‘pro-Kanye’ posters on social media decided to accuse anyone who was negative about him or Hip-Hop as being a racist. Pathetic. For the majority of us, not liking what he does is nothing to do with race. It is a bit like someone saying that because you don’t support their favourite football team that you are anti-football and that to be so is an abhorrent act. It is possible to just not like something. I like some heavy metal but cannot stand ( or sit, jump or anything else) thrash metal, death metal and probably some other genres out there.

On to his performance. Well, aside from Kanye’s potty mouth what else was there ?. Ordinary performance of Gold digger, soft use of Foreigner’s Cold as Ice and a mash up of Gary Glitter’s ‘Rock and roll part 2’ with Suzi Quattro’s ‘Can the Can’ forming the music for ‘Black skinhead’ . His being unable to cope on that big stage when someone unscheduled joined him was amusing. Quality professional performers can carry on and let security do their job. Instead he got the backing track he was performing to taken back to the start. Backing track – says it all in terms of his mis-judging what is expected, nay required, of live performances. Then there was Bohemian Rapshody. Well, I am confident that Queen were not the only ones having a good laugh at his rendition. In light of his declaring himself to be the biggest Rock star in the world this was even more laughable. Has he heard of The Who ?. Making such a claim when one of the true greats of that genre are the next day’s headliners is just asking for trouble.

So, was I impressed? No. He disrespected the festival goers by his stage show ( ignoring the halogen grill lighting rig). He disrespects many people within his ‘songs’ and does so in a manner that is offensive. Does he have some good ‘songs’ ?. Yes. Is he a festival headliner ?. No

Cathartic process complete, I think. Now on to the rest.

Big caveat with what follows. I was not there, I was watching on BBC TV and online live streaming. Therefore as well as my missing out on the atmosphere I was also not swayed by the emotional hysteria that can be present. My first experience of a music festival was Watchfield in 1975. In 1973 my parents thought I was too young to use a spare ticket a friend of my sister had for David Bowie at Hammersmith Odeon in 1973. Yes, that one. The one where the day after the media was full of Bowie announcing his retirement. Happy, not.

There were many performances that I wanted to see, something which the variety of media streams helped me to achieve.

I have already mentioned George Clinton’s extravaganza on the West Holts at the same time as Kanye. No disappointment there. One of the true greats in his influence even now.

In a similar vein was Roy Ayres. One of the Jazz Funk greats. Opening with his biggest UK hit, Running Away, immediately made it for me. It also showed Roy’s confidence in the repertoire he can call on. Smooth and stylish quality.

Keeping the George Clinton’s link going, next up is Mark Ronson’s set. For me his set started badly. He opened with a track from his current album that I have not listened to all through. The track is a constant stream of potty mouth ‘lyrics’. By the time Boy George came on for ( someone to love me???? ) things had distinctly improved. In terms of the performance it would probably have been better for Boy George to have the lead vocals all to himself. This performance, as with his opening number, we’re culled from the red button highlights. Next was an unexpected Do you really want to hurt me ?. Joyous to hear it again. The tribute to Amy Winehouse was poignant. Reminding us of her talent despite her passing. Both sad and joyous. It was predictable that Uptown Funk would be his set closer. Mary J Blige gave it a different feel and, for the reasons that Mark Ronson stated, it was fitting to add in George Clinton. I like the groove that Jungle create and am happy to have them as an ambient background. For me they lack that extra spark to make them demand my attention. The antics of the young dancer – wow. That did demand attention.

Some bands / performers have their fans but do nothing for me. The Vaccines and Maccabes fall into the category. As does a certain Ed Sheeran ( heresy…. ! ).

Glimpses of Vintage Trouble and Soil and Pimp Sessions gave me a couple of bands that I need to check out some more. Also I missed Steel Pulse so it is the online viewing for me on those.

What can I say about FKA Twigs apart from Wow ?. When she appeared on Jools’ Later I was entranced. The album lives up to that performance and her Glastonbury performance left the others behind. Enchanting, enthralling and excellent. Constantly holding the attention of the crowd. When she spoke to the crowd towards the end of her set her humbleness at being there and the reception she had came over in full. Stunningly talented.

George Ezra and Clean Bandit showed more than enough quality to hope that they’ll be around for a good while longer.

What can I say about Lionel Richie’s performance other than joyous reminiscing. I wore out one copy of Sweet Love and purchased a second. Since those Commodore days he has become more mainstream but still good songs and fully engaging performer. When he started performing Brickhouse I was delighted. Mashing in a segment of Fire by The Ohio Players was a pleasant surprise. The smattering of other Commodore songs, including Easy and Three times a lady, brought back so many memories, Joanne. According to estimates he drew the biggest crowd of the whole event. Yes, bigger than ‘you know who’. At one point Lionel was overwhelmed by the response of the crowd. Even security performed a dance in front of him. Total talent and not a potty mouth word is sight. True quality doesn’t need that to be successful. Fitting that he should finish with a uniting plea and We are the world.

I momentarily saw a glimpse of Charlie XCX and glimpsed more than I expected. Not exactly role model styling on the clothes front.

Another rock legend who was performing, and of a magnitude somewhat greater than the one whose name no longer needs to be mentioned, was Patti Smith. Full rocking performance complete with a special guest appearance of the Dali Lama. I still find it very strange that the Chinese invasion of Tibet was not met with the same ‘Western Government’ reaction as Kuwait, Afghanistan etc. Free Tibet. My first experience of Gloria was by Eddie and the Hotrods. More rock in that one song than the whole of Kanye’s set. For me the only part of her set that I didn’t like was, yes, the potty mouthing at the end. Great that she did My Generation as a tribute to The Who but the gleeful bleepable language spoilt it for me. Live performance photograph of a guitarist in All the best Tapes performing at Hippy Horror, Foxfield, Blythe Bridge.

One of the first singles that I purchased for myself was The Who’s 5:15. With such a massive collection of songs to chose from I was not surprised it wasn’t in the set that was televised. 50 years on and still great rock performance.

The last performance that I watched over the weekend was F.F.S. On at the same time as The Who which I also wanted to see but less likely to be shown in full later. The combination of Franz Ferdinand and Sparks might seem an odd combination but it works so perfectly. Kimono my house is a favourite album of mine and I’ve been a fan of Sparks’ intelligent and witty music since. Following on from the performance that I saw on Jool’s Later I was intrigued and anticipating much. The addition of Franz Ferdinand distinctly ‘beefed up’ the feel on Sparks songs. With the Franz Ferdinand songs the addition of Sparks seemed to add layers and textures. The new songs have a definite quirky Sparks feel with the power of Franz Ferdinand within. The combination of Russell Mael and Alex Kapranos voices works very well together. For me there were several highlights in their set. The first was the simplest. Ron changed the ‘Roland’ name label on his keyboard to Ronald. It matches the way my mind works. Sticking with Ron, he not only sang but danced as well. In those brief moments he got more audience interaction than the whole of the set of ‘he whose name must not be spoken’. Throughout the set young fans were seen singing along. So young that they were definitely not alive when Sparks were having hit singles and were at best still on nursery rhymes when Franz Ferdinand peaked.

I’m tempted to look past the way they finished the set with ‘P _ _ _ off’ from the F.F.S. album. The way that it was introduced was in line with the intelligent humour that threads it way through their songs.

Kanye might think he is the greatest rock star on the Planet but Sparks / F.F.S. have ‘The number one song in Heaven’.