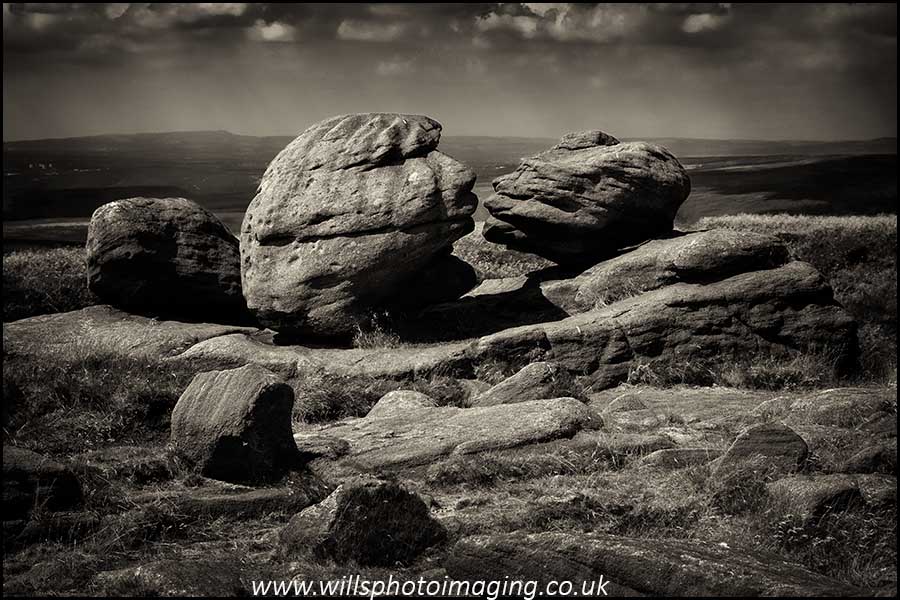 It seems to now be an annual pilgrimage to make this trip but it is more a case of it being the easiest way for me to spend a night on a hill / mountain at over 2000′. 08:21 train from Blythe Bridge to Stoke and then up to Manchester for a train to Hadfield. Arriving at Hadfield I always find it to be a reminiscing point. I remember when it was the main Trans-Pennine freight route as well as a passenger line to Yorkshire and beyond. Instead it is now a single track into the station with a buffer stop just beyond the end of the platform. Yes, the Longdendale Valley looks better without the railway’s overhead electric cables but…………. Making my way out of Hadfield I kept being told I was going the wrong way. There was a charity fun-run on and for a little while I was going in the opposite direction. With my running out of ways to get up on to the hills I opted for a route on farm tracks by Blackshaw Farm that led to the Access Land of the hills but showed no public rights of way. When I got to the farm entrance the only signage I could see, apart from its name, was a ‘NO Cyclists’ sign. I continued along the farm track. As I gradually drew closer to a barking Alsatian I was able to see that it was on a chain / lead and also that the track I wanted went off to the left before I reached it. Dog avoided and on through the fields. All the while I was expecting someone to turn me around but no one did. One of the fields had a bull in amongst cows and some sheep. It made some noise but no more. I was glad to leave that field. By now it was definitely warm. Once on the access land I continued up the track, gaining height quickly. On one side was a DEFRA study area where the land gets different covers put across it depending on what the weather is doing. The previous time I was here the gate easily opened and I ‘took a nosey’. This time the bolt on the gate would not budge and I was not inclined to climb over the gate so I continued on my way. Next up was a bit of an eyesore. By Glossop Low. Part of this was due to it being a place where upland improvement work materials are clearly stored in white bags along with a large wheeled CAT vehicle. The other part was that it has the ruins of a ‘shooting bothy’ and associated paraphernalia. It was strange to see that the solar panel fixture that had been here has gone along with most of the other things. Next I was at last onto a mainly peat based path aided by a number of boardwalk sections. Since the last time I walked this way one section has definitely deteriorated. One of the planks has snapped as has a handrail. Just past Torside Castle this track joins the Pennine Way. I shunned this route, preferring instead to head straight to Wain Stones. Still gaining height and still hot. Since some other people were already lunching at the stones I went on a bit further. Once replenished I went back to Wain Stones to once again get the customary ‘kiss photo’. I was then back to Bleaklow Head and then followed the Pennine Way southwards all of the way to the Northern edge of Kinder Scout. Whilst descending from Bleaklow Head I had a couple ask me ‘if it was the path to the white pillar ?’. I had to ask which trig point. They wanted the one with a lot of aircraft wreckage, the Superfortress that crashed by Higher Shelf Stones. The Superfortress is the plane type that the Americans used to drop the atomic bombs on Japan. This one crashed after the war. At Snake Pass I was getting ready for purgatory. Between the Snake Pass and Mill Hill the route is paved with slabs that used to floor mills. They are ‘wrong side up’ making for a rough and uneven surface of unrelenting hard wrenching. When I first came this way in the 1970s and again in the 1980s it was just peat. Yes, it was something of a quagmire but at least it was soft and challenging. Now it is just an uncomfortable plod which often leaves my feet and legs in a bad condition compared to other surfaces. My feet definitely deteriorated this time. From Milk Hill it was a short downhill to the saddle between Mil Hill and Kinder Scout and then up the Kinder Scout side. Once I got to the knoll on the edge of the plateau I headed East along the Northern edge. I anticipated stopping at Nether Red Brook, a favourite place of mine to overnight. Given how damp parts of Bleaklow were I was optimistic about the water flow at Nether Red Brook. However, Kinder seemed to be much drier than Bleaklow. By now the sun and heat was getting to me, I just wanted to get there and stop. I was not expecting the meagre trickle. However, I had to stop. My first attempt to fill the bag quickly stopped, too much vegetation floating around in the bag. It took quite a while to fill the 2 litre bag and it was very brown. Chlorine tablets in with dosage increased by 50%.
When I first stayed here finding a flat and relatively level spot was not difficult. As time passes this has become more of a problem despite my being in the same spot. The reason for this is simple, the upland regeneration management. It is great not being kept awake by sheep and the insect life in the area has massively increased. However, areas that were easily sleep able on are becoming distinctly overgrown. Oh well, Bivi pegged down and sleeping gear arranged. I had a change from my normal ‘one night light’ evening meal. Instead I had some cheese coleslaw in pitta breads along with some mini scotch eggs. Just before 6pm a couple appeared along the Northern edge from the east. They paused at the point where the stream goes over the edge and I did not see them again. I can only assume that they had decided to descend Nether Red Brook to the Snake Pass path. At about 18:30 whilst I was on the edge looking for photos another couple approached from the east. They wanted to know the best way for them to get to Edale. Edale is south of Kinder Scout, south of the southern edge and we were on the northern edge. They did not have a map, just a ‘phone APP. Since my map was at my Bivi site they came over with me. Options discussed, I then let them break copyright law by taking some photos of pertinent sections of my map. Whilst this is not legally ‘right’ I do consider it to have been the correct thing to do at the time. After a food & water check they were on their way. I think they had a very long day and hope I do not read about them later. It was still very warm although the wind was getting up. Keeping my eyes open for an elusive sunset over Manchester was a waste of time and the land of horizontal rest was engaged with. Once you adjust to the lack of space in a Bivi bag and what you can / cannot do they are OK. However, when it is windy you feel every blast. Also, in cutting down on the weight of gear ( 16lbs for overnight gear, clothing etc but not food and camera gear), I did not have much to make a pillow with. During the night that low pillow and the blister on the back of my left heel were the dominant factors in my sleep. The lack of sheep bleating courtesy of the upland management scheme and the grouse seemingly keeping their presence quite ahead of ‘the glorious 12th’ meant no animal noises to disturb me. The morning was clear, for once, but gloomy. Cloud had come over but was not layering the hills in their damp cloak. It was clear that my blistered heel would determine the walking this day. I was therefore not in any rush to get started and it wasn’t until about 8am that I set off. The wind that had started yesterday afternoon had not eased and it was at times blowing me around. I headed West, keeping to the upper level of the edge. Back up to Mill Hill and the first people of the day came into sight. I wasn’t going to repeat the purgatory trail to Snake Pass. Instead I headed north-west, still paved but bouncer and downhill. I left this established way over China Moor that keeps on to Burnt Hill in order to head over to Harry Hut. This is a bit of a misleading description since there is no Hut but there is a trig point. There is a shooting cabin lower down to the north-east and it might be that there used to be a gamekeeper’s or shepherd’s Hut nearby. Carrying on past Worm Stones and down to the roads into Glossop. Three priorities there: a wash, put the rubbish in a bin and get some orange juice. All met, feeling better and on to a train back to Manchester. I had a while between trains at Manchester and had a bit of a wander around. During this it was definitely ‘back to reality’. In Piccadilly Gardens there was a steady stream of Pokémon Go users heading across on the same route heading to where another imaginary virtual creature. Harmlessly enjoying the Sunday sunshine and of a variety of ages.

It was then back to Stoke and my reality.