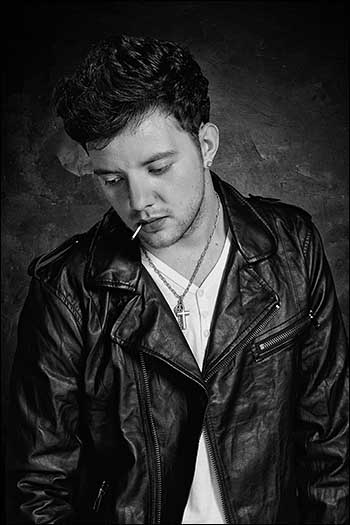 In 2009 there were some active photography networking groups on Purestorm and Flickr that focused on off-camera flash and on location model photoshoots in Staffordshire with many of the people based around Stoke. In August I ventured to The Custard Factory in Digbeth, Birmingham for a ‘meet-up’. I didn’t know anyone who was going to be there or what to expect. It was all we to me. The main organiser of that event was Duane Barratt. It was an enjoyable day despite the rain. My learning curve was definitely very steep.

Over the next year I took part in a few more such events and Duane, a Stokie to the core, made a switch from the modelling to the photography side of things. We had quite a few joint photo sessions in my studio space, often with his partner Mel doing hair and makeup. Winter 2010 and Duane opened up his own studio on London Road, Stoke, In The Frame Studio. The first studio based photographer networking meetings took place there. It was only photographers, we used each other as models sharing techniques and skills. Meets would be arranged on FB and the results posted in the group as well. Another member of this group was Matt. Matt organised large ‘groupshoots’ at places like the Crewe railway heritage centre. Duane moved and the studio closed before re-opening as Brisco’s. Paul was a part of that Flickr group. The networking continued under the planning of Matt but with models as well as photographers. When the studio re-opened the networking sessions found a home back on London Road. The studio changed hands again and became Ohana. Networking meetups have continued, albeit less frequently due to Amy’s commitments.

Over the last few years a few other networking gatherings have developed. These are at the Courtyard Studio in Tunstall and Boiler Works in Shelton. There are now up to three opportunities each month for photographers and models to meet up, have a chat and take a few photos. When compared to the original group there seems to be less emphasis on technique sharing and learning with more emphasis on taking photographs. Each venue has its own strengths and weaknesses. Primarily, for me, lighting equipment. Given the quality of the equipment that I have for my own use it is not surprising that, for me, this is a factor. The lighting that is available at The Courtyard Studio is lighting that I can use and, for the purposes of the evening, and not worry. If I was to hire any of the three then, as when Brisco’s had ‘model days’, I’d be taking my own lighting gear. It is one of those classic ‘if you know what quality is then it is easier to know when it is missing’. What therefore would make me hire one of the local studios ?. Well, a need for more space than I’ve got is the most obvious one. Another is access to a different range of setups. For events and other sessions I’ve temporarily converted a hair salon, pub bar, train station hallway, conference rooms and other spaces into a studio. Without the equipment these would not have worked out. This is something that a lot of people are willing to try to take shortcuts on. Setting up some form of photography business without being willing to invest in what is necessary to reliably deliver quality results.

The photos below are from a recent networking night at Ohana / Briscoe’s / In the Frame. For this photo of Fiona I preferred to use the modelling light of the flash unit as opposed to the flash since it is more consistent and actually gives a better quality of light than the flash units. The stained wood wall section at Ohana is a feature that I definitely like. For this photo of Rachyy the key light was an Icelight that I’d taken along. Moving out to the back ‘yard’. This was lit with ProFoto A1 modified with a Rogue Flashbender XL in strip mode that I had taken along.