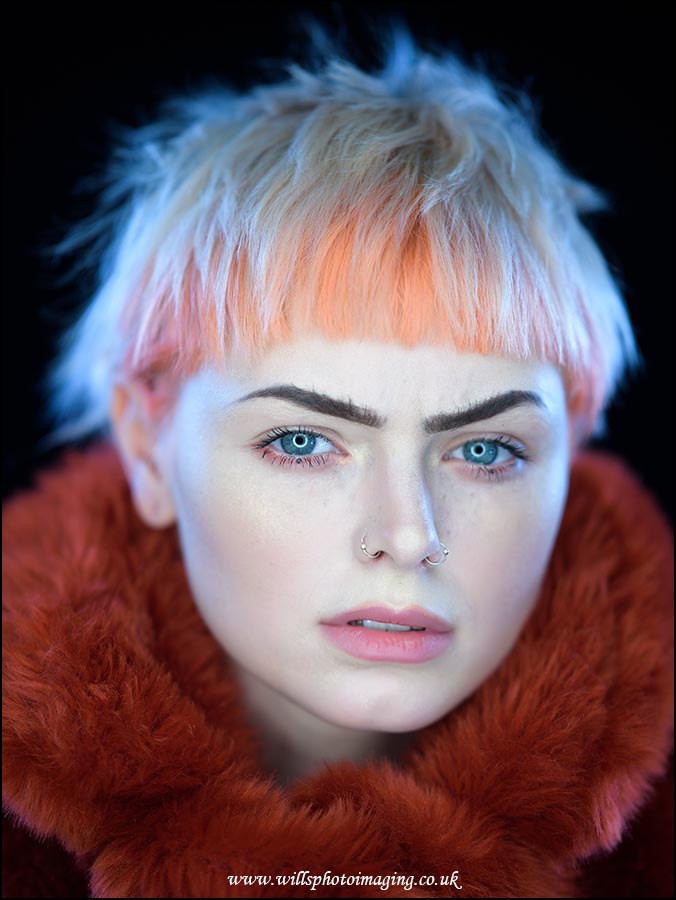 Well, that’s The Photography Show 2018 finished now. For the second consecutive year my first train was late. This time though it didn’t result in my getting there an hour later than I intended. I was equipped to take some photos of the Comicon people, hence my getting there for just after 9am despite the Photography Show opening at 10am. The NEC had added an extra S-bend to the Comicon entrance and were doing their best to not allow photographers to mingle without a Comicon ticket. Their place, their rules. The lighting and backgrounds in the concourse area are not ideal. Supplementary lighting, whilst it helps, really just further emphasises the snapshot nature of things out there. After persevering for a while I decided to head for The Photography Show queues. As I did so I noticed that the side doors to the open Piazza were not locked. I ventured through despite there only being smokers out there. As I started to look around a group of ‘Predator’ characters braved the snowy cold and came out from the Comicon doors. I managed to get a few photos and they didn’t mind. When I ventured back one of the NEC staff was sealing the doors. I made it back just in time. At the show itself, most of my time was spent walking around the show looking at things on various stands and at the ProFoto stand. Around the show there were a lot of demonstrations going on, mainly with bland setups and little meaningful input. I tried a few of the Live Stage offerings but was already too late to be in reasonable earshot and to get a good view of what was going on. They also seemed to be starting at a point that indicated it would be a waste of my time. Contrast that with the Hannah Couzens and Holly Wren sessions that I saw at the ProFoto stand. Full technique input, including style and communication considerations. They were producing images that were immediately saleable, on-stage and no fuss. I find there is a distinct contrast between working professionals doing their best to create the image before the shutter button is pressed and other people who are still happy to spend time afterwards sorting the image out but degrading the technical quality. To me the ‘I’ll sort it out later in Photoshop’ is a euphemism for: ‘I cannot be bothered to learn how to use my camera and light effectively’; ‘I cannot be bothered to use the skills that I do have’; ‘I don’t really care about maximising quality’; `I don’t know how to optimise the image when taking the photograph but I have spent a lot of time learning how to use Photoshop’.  Professionals, where time is money and lesser technical quality can reduce their income, know that getting as much as possible ‘right’ at the taking stage is the only sensible method if working.

The Zeiss stand had an interesting setup using a Dedolight spot projector with a variety of cookies / gobos to both produce an outline shape and hard lighting. The Interfit stand was making much use of their LED ringlight amongst other things. Whilst the general quality of the light it produces can be very pleasing, the catch light being a circular halo is not to everyone’s liking. The usual scrum situations were not so evident. Possibly because all of the models that I saw were modestly or themed dressed. Not surprisingly I had a bit of a chat at the Rohan stand, their first year there. It was my first port of call. I’ve been wearing Rohan clothing since the late 1970s. Designed for comfort performance, not to a price or trend.

I was pleased to find on the Snapperstuff stand that, as I’d hoped, the Think Tank dual Pro battery holder is just the right size for ProFoto A1 batteries. Previously I had snipped a 4 battery case to take 2 of the A1 batteries. The pro holder is a better fit and would be my first choice. I also completed my ProFoto A1 setup at AJ’s stand. After looking at the gel set for this I decided to continue my pursuance of alternative routes. I do not want to directly fit gels to the A1 heads since they can get warm and this will both shorten the life of the gel and risk contaminating the flash head. I could cannibalise a spare wide-angle

Also, quite by chance, I saw a bag on the Manfrotto stand which is a likely replacement for my LowePro S&F Specialist 80 Bag. It was the Pro Tactic 180 and whilst it will probably not take my 70-200 lens,  it does take nearly the same amount of gear. It’ll therefore be a smaller bag that more easily fits into a rucksack. I was told the show price as nearly £150 so I didn’t take it any further. On getting home I found that it is sub-£100. The person on the stand must have either looked up the wrong item or made a calculation error. One to think about.

I made sure that I went to the Creativity Backgrounds stand and, yes, it is the 5th year running that I’ve had at least one photo on display. On the train back it was the sort of squeeze that the 16:33 from Stoke to Derby can be on a Friday. One of the people squeezed into the corridor alongside me declares she is a Liverpool fan. She wasn’t sure who they were playing so I get out my Watford key fob. On my next train, Watford already two nil down, the couple in front of me are looking at the same game on their phone. Liverpool’s third is greeted with glee from in front of me and ‘noooo‘ from me. At that point I decided that dinner was going to be a take-away. I wasn’t going to rush home through the snow to watch 20 minutes of Liverpool domination.