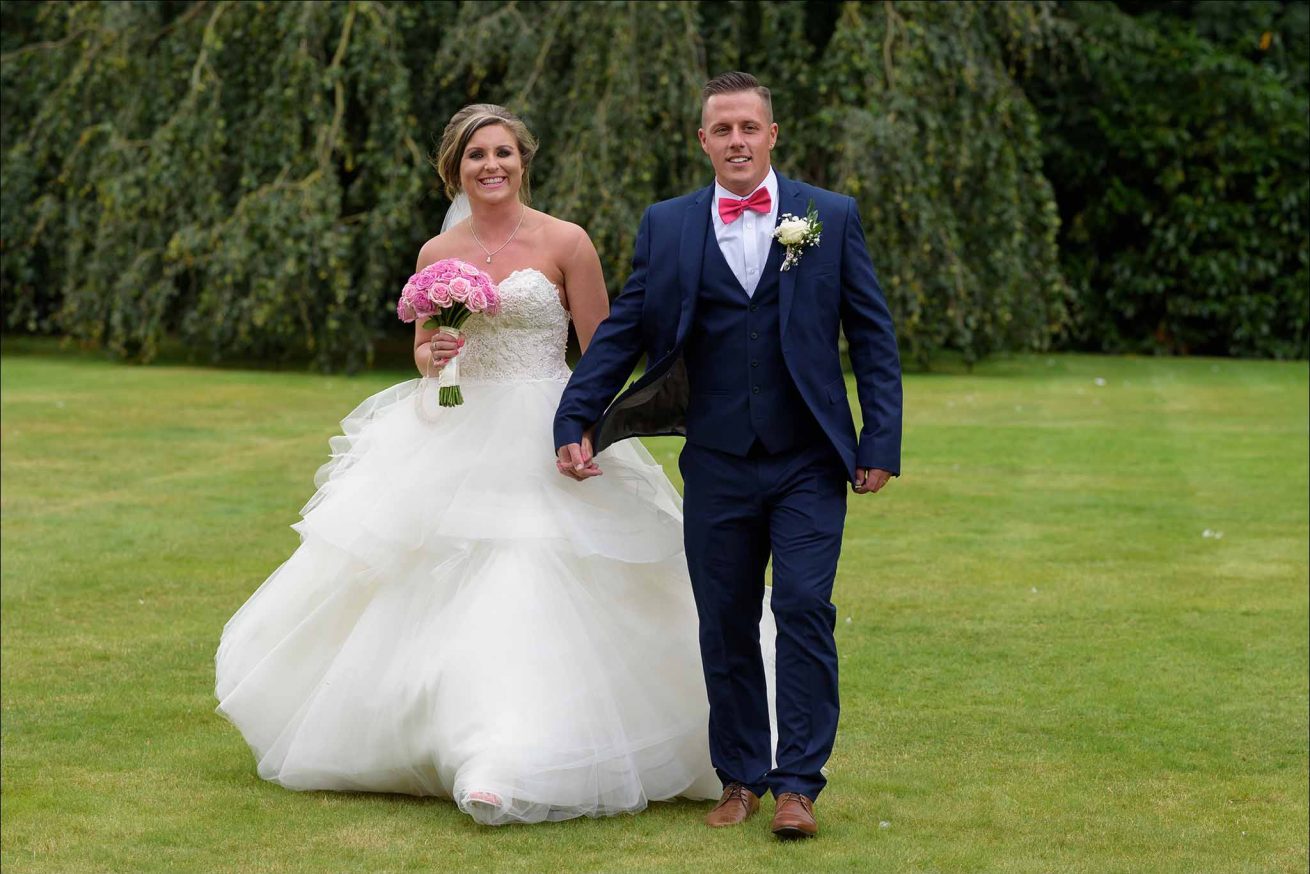 Last year there were increasing numbers of media reports of snappers getting it completely wrong with regard to etiquette at weddings. One video that went viral was of a snapper being severely but correctly admonished by a Minister. This is an increasing problem and the restrictions that result are impacting on all photographers, not just the snappers.

In the last century ( not that long ago ) when I used a Bronica at a few weddings some things were very different from how they are now and some things were very similar. Back then, if I’d be on my 4th roll of 15 exposure film for the arrivals, ceremony and formals then I’d probably taken too many photographs. With the loud mirror slap of medium format film cameras and the generally much greater respect for the sanctity of the wedding ceremony, it was very obvious if you did anything that interfered with the ceremony. These days there are wedding snappers whose disrespectful behaviour has made life much harder for photographers. Even back in the days when film was the only choice, I remember a wedding at a Church that I knew very well and I had to stand at the back during the ceremony and not take any photographs. Restrictions like that are not new. However, restrictions like this have moved from being unspoken yet understood to a point of friction between snappers and Clergy.

The disrespectful antics that have led to clearly stated and heavily emphasised restrictions are easy to identify. One of the obvious ones is shutter noise. Whilst shutters are much quieter now, they still make a noise. If you put your camera into ‘motordrive’ mode and take 20 photos when one will do then you are making 20 times as much noise as is necessary. Another obvious one is the use of flash or ‘video lights’. They are a distraction, they interfere with the flow of the ceremony. From the photographer’s point of view the lights of a videographer might be an advantage or a disadvantage. The lights might reduce the need for a high ISO and therefore decrease the noise or possible motion blur in an image or they might completely destroy the ambience of the setting. One of the interferences that seem to be less obvious to snappers and some photographers is the choice of lens focal length. By using an angle that is wider than necessary you not only distort features within the scene but also move in closer than if you were using a more suitable, longer focal length. If the view that the guests have of the Bride and Groom is repeatedly blocked by the photographer then they will not be very happy. When taking part in social photo sessions and when helping other photographers I see this inappropriate use of focal length issue when the person with the camera has plenty of space to move back. Strangely, from what I’ve seen it tends to be users of one particular camera make who exhibit this problem. It is at the stage that the technique seminars that I have attended over the last few years have seen a significant increase in the problem being brought to the attendees attention. The net result of the disrespectful behaviour of various snappers over the years is what can appear to be draconian restrictions. It only takes one person to interfere with a Wedding Ceremony and all photographers will be tarnished with the same brush. It is not unusual now to be told ‘no photographs in the Church’ or ‘no photographs during the Ceremony’ to which can be added ‘no flash’. Not all wedding ceremony venues and celebrants have restrictions. I was quite surprised at one Registry Office when I was told I can do what I want as long as I don’t get between the Celebrant and the Bride and Groom.

It is possible to get some restrictions relaxed but not by arguing about them or by sneakily getting your assistant to mingle and whip out a camera at a prime moment. I had one wedding which was a ‘no photography during the Ceremony apart from entrance, exit and the signing of the Register’. The Vicar quickly realised that I was not the type to just snap and flash away without any real meaning. He told me I was allowed to be in the Choir Stalls and take a few photos of the rings and the kiss but without any flash. All parties were happy. At another wedding I was told to stay within touching distance of the Font at the back of the Church and no flash. During the Ceremony the Celebrant kept made sure that the Bride and Groom were facing each other, sideways on to the guests, during the rings and the kiss. With a long focal length lens on a monopod I was able to get photographs of these moments without being intrusive. After the Ceremony I got a ‘thank you’ and if I have a Wedding at that Church again I might be able to move a little further forward or setup a remote camera or ……
The actions of others mean that those of us who understand and respect the sanctity of the marriage ceremony have to regain the trust and respect of venues. The selfish acts of someone else who considered their photography ‘needs’ to be more important than the Ceremony itself, the Bride and Groom and the guests gave the stimulus for restrictions to be increased and clearly stipulated. 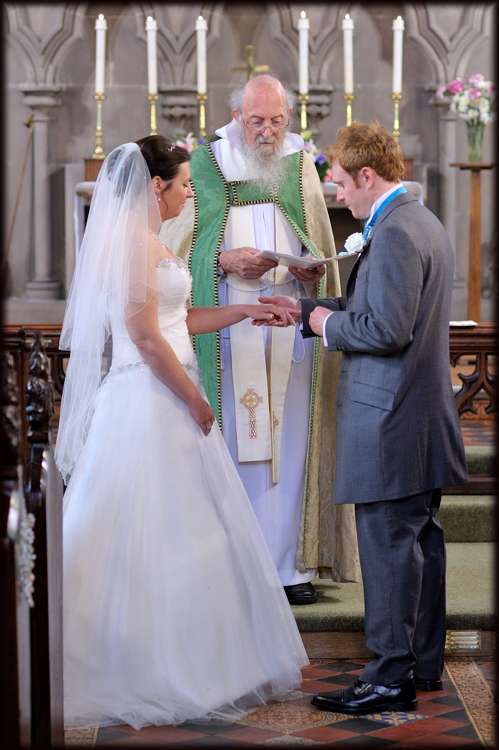 Bride and groom exchanging rings at a wedding, taken from where I was told to be – at the back of the Church within touching distance of the font.

One of the things I make clear to prospective clients is that I can only photograph what I can see and what I am allowed to photograph. If restrictions at the venue limit this then my coverage will be restricted. If the couple are not positioned such that from my allocated position I cannot see what is happening then I cannot photograph anything of any detail other than their backs. Photographers might be able to produce magical images but, alas, we are not magicians.

How can we move forward from this position ?
Let us first look at the causes:
– inconsiderate photographers thinking the Ceremony is about themselves
– ‘Machine gunning’ with a camera instead of selecting decisive moments
– The effect of flashes firing
– Photographers who do not respect the religious importance of the Wedding Ceremony

If people causing problems at weddings such as those listed above keep snapping away at weddings the problem will not ease, instead the imposed restrictions will get worse and at a blanket level. Even if these inconsiderate and disrespectful snappers stopped photographing weddings it will still a long time for levels of trust and mutual respect to be restored. Alas we are a long way from this with the anecdotes indicating that there are snappers who, after being told of the restrictions, look at ways to circumvent them resulting in more problems.

If there was a regulatory body for photographers then these people might either be weeded out or they might learn to change their ways. Whilst there are organisations like the SWPP ( The Societies ), BPPA, and the AoP, they are not regulatory bodies. Photography is not like medicine, gas fitters, electricians etc. If you are not an authorised gas fitter it is illegal to do any work on a gas fixture or supply. If you are not a qualified and registered doctor you are not allowed to be an active doctor. For photography the only entrance requirement in some people’s eyes is a camera, hopefully with a lens as well !. As a result it is very hard for someone who is looking to commission a photographer to be able to have any idea of what they are likely to be getting. One simple step is to look for qualified members of one of the organisations for professional photographers. Whilst this will filter out some quality photographers who have decided not to join one of these organisations it is a simple, although not exclusive filter. Websites can give some indication of the photographer’s end product although still with some possible pitfalls. For example on my event photography page I only use photographs taken at actual live events. My wedding photography page has photographs from actual weddings. There are some people who use photographs from setup sessions to advertise their services. There is a big difference between having an hour or two with some models in a very controlled environment than being able to produce the goods at an actual event or wedding. There is also the problem of knowing what to look for in images. The trained eye sees a lot of things that the casual eye will not notice but might be left with a nagging feeling that something is not quite right. Some pointers on some of these can be found in another blog post of mine.

Phew, if you have read this far, well done. Either you found what I’ve said interesting, informative or controversial and looking to challenge me on some of what I have written. What is here is my opinion, different people have different opinions. I do not have a problem with that. Where I do have a problem is when people with a camera think that the wedding ceremony is being put on for their benefit as opposed to the Bride, Groom, guests and as an observance of a religious ceremony. Invite a photographer to your day, not an ego who has missed the point.